Actually, deep inside myself, I am a very lazy holiday person. And I mean proper lazy. I am not the kind of person who gets bored on the beach after one day of lying around. In fact, I have not yet been confronted with the feeling of being bored of lying around. Even after lying around 10 days in the Maldives I could have gone on. Honestly. (ok, there might’ve been some pleasurely dives once a day, but not in any way exhausting or regular). So one of the reasons I wasn’t mad keen on children is because I’m so deeply lazy by nature, and conscious of that fact.

There is, however, one exception to this general rule and that’s the mountains, which I love. I have spent quite some time in the mountains sans kids, and coming to the mountains with the girls actually sort of solves this clash of my nature vs. the offsprings demand. I just love being outside, surrounded by these great views, even if I can’t actually do the hiking (or proper mountaineering) part anymore . Plus, in this case since Twomimidad was away for the first 6 days of our stay, I had the great support of my Mum. If it wasn’t for her, I wouldn’t have come here in the first place (thanks again Mum, you’re my star, as always!!! And thanks again for the additional day of babysitting where the Twomimiparents were able to go up to the Segantini-Hütte & Piz Languard).

Because, for all of you who don’t have kids, no matter where we are, the things the girls want are the same: a.) regular feeding of cooked and uncooked food and b.) some form of entertainment ideally combined with the possibility to wear themselves out. And just in case you’re wondering: we do frequent cuddles & giggles at any stage in between.

To illustrate my point: by the time we will leave tomorrow morning, we will have served the girls 17 cold meals (breakfasts & snacks) and 18 cooked meals. And cleaning the floor after each of these. And I’m not complaining here, it is just a fact to actually prove to myself (or any other parent out there!) why I sometimes find it a drag, even if on holiday (though as stated in my last blog, part of this is self-inflicted). It just goes onandonandonandon. BUT the entertainment part is so much easier here, because I love being here and even the playgrounds to me have a different kind of vibe. And some of these playgrounds actually are on top of a mountain. Though I am not entirely sure if this is a good thing, since even a small walk then turned very uncomfortable as every step was accompanied by whining of Mimi #1. Mimi #2 just fell asleep and had to be woken up after 30′ lest we ruin our naptime….

Anyway, during the past 10 days we went up to three mountains on three different days and had lunch there. All by means of automated transport of course: Alp Languard, Diavolezza  (below)

and Muottas Muragl (aka the one with the playground). We went shopping in St. Moritz (though not the glamourous kind, mind you, we went to Coop since we’d also forgotten to bring ANY toys for kids (so much for packing with three adults…)). And we went to the indoor pool in Pontresina twice upon special request by Mimi #1 (highly recommended for small kids btw). Plus, lest I forget, approximately one billion trips to various playgrounds in the area (highly recommend the one next to Hotel Müller in Pontresina, the one near Stazersee and the one next to the Kempinski in St. Moritz Bad) and short walks. It has to be mentioned though that short walks usually only wear the adults out since they have to push the bike trailer with both of the Mimis in it. Mimi #1 seems to have inherited the lazyness gene in this respect. At our beautiful flat we also blew up a LOT of  balloons to keep us company and made a rough estimate of 100’000 soap bubbles on our balcony with a view.

So all in, we had a pretty busy week and we still have plenty of things we haven’t done yet, such as going for a ride on the Rhätische Bahn, or watching the Kite-Surfers, or going to the Val Roseg and watch the Squirrels.

What never stops to amaze me though is, how little the kids need to make them happy. One playground or cable car or snow field in summer is enough. In the pic below, Mimi #1 kept saying she wanted to make “Chügeli” (small pellets of snow)… 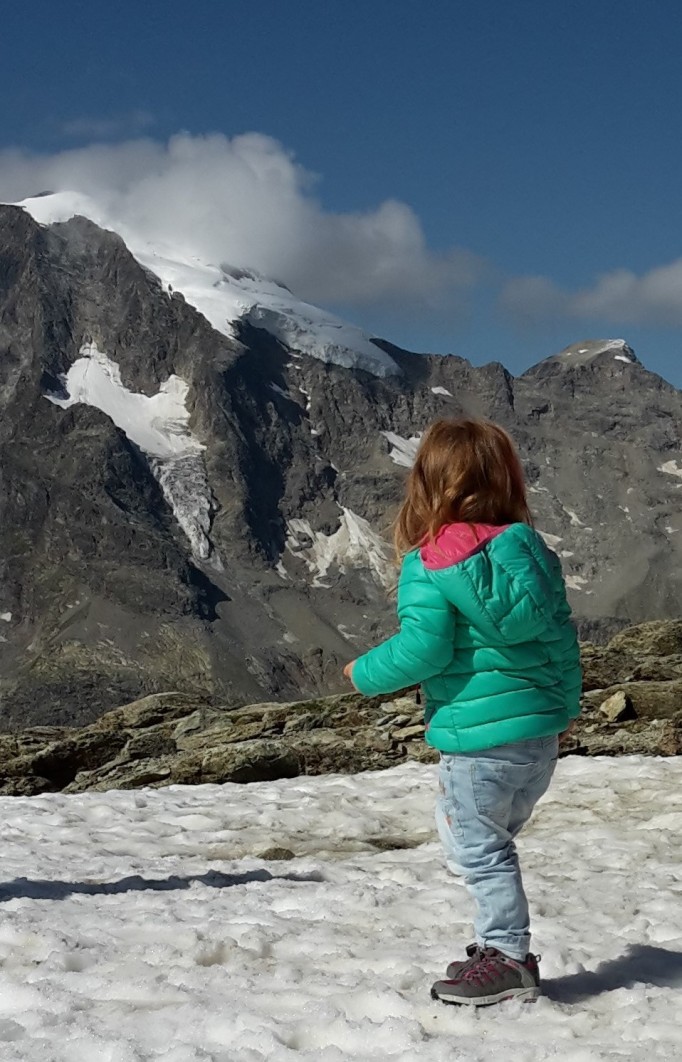 I am enjoying and embracing this for however long it will last (as I try to do with all the fantastic, heart-melting stuff). I have no idea what you would do with a teenager who finds everything boring and crap (as I remember doing myself).

As you can see, plenty of plans for next year, and maybe, just maybe, we go the Hotel-way next time around, sacrificing space for cooking and cleaning time. Who knows? And how lucky are we to actually have all these choices?!!! Thanks Engadin, see you next time!

Welcome to the blog of a human, mother, worker, wife and friend who refuses trying to have it all (and never stops marvelling at all the great things that happen on the way there). If you'd like to start from the beginning, click the blog tab at the top of this page.